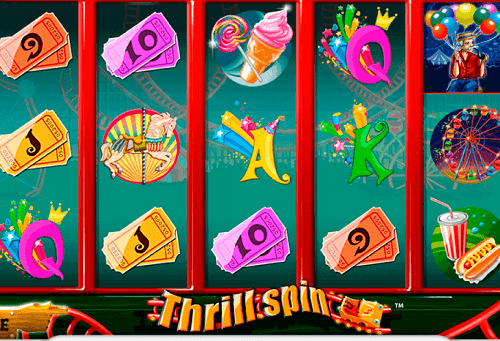 Despite Thrill Spin being an older style of slot machine game, it remains quite popular with NetEnt followers.  The game features five reels and fifteen paylines, as well as scatter symbols and wild symbols. There is also a free spins bonus game that is triggered by the scatter symbol. All the paylines in Thrill Spin are customizable, with players able to set the bet levels from between one and five, whilst coin values can be set from 0.02 to 0.50. This lends Thrill Spin greatly towards beginners, as the game is not too involved and has a wide margin for error.

A great feature that makes the game good for beginners is the free game option. Initially players are able to try the game out for no real money at all. This allows a player to get the hang of the game before involving any real money.

As mentioned, Thrill Spin is set in a carnival setting with a roller coaster as a back ground. The game is colorful and bright, just like most carnivals are. There is a slightly spooky theme to it too, just to offset the cotton candy sweetness, in the way of the haunted house and the slightly creepy balloon sales guy.

The symbols start with the basic deck of cards J, Q, K, and Ace, and are rendered to look like entrance tickets. The rest of the symbols are things that players would expect to find in a carnival, namely big wheels, cotton candy, lollipops, carousel horses, the haunted house and the afore mentioned faintly creepy balloon guy. There is even a quirky background soundtrack that is reminiscent of old school carnivals everywhere.

The wild symbol in Thrill Spin is the aptly rendered girl riding a thrilling rollercoaster. As is expected with wild symbols, the Rollercoaster Girl will substitute for any other symbol on the reels except for the balloon wielding scatter symbol. Any wild symbol that forms part of a winning combination immediately doubles the payout level.

As in several video slots being tried out here, the more wild symbols that are found in the reels and in the winning combinations, the higher the payout will be.

Thrill Spins scatter symbol is the mildly odd looking balloon guy. Three or more of these guys found anywhere on the reels activate the games free spins round. During this round all winning combinations are tripled. Scatter wins also integrate a multiplier into the main game, as well. So basically should a player spin two, their total bet will be multiplied by two.

Spin three and it will be multiplied by five. Four spins will be rewarded with a 25 times multiplier and five scatters will land a player with a pretty large 500 times their bet amount.