Blackjack is most often considered to be a game based purely on luck, while poker is considered by many to be a game of a bit more finesse and skill. Though they are both played using cards, their aims are very different.

Blackjack’s only aim is to reach or get as close to 21 as possible while beating the dealers hand, while poker has a variety of options available but usually it’s main aim is to have the highest hand of cards available with which to beat other players.

Blackjack revolves around a single player or multiple players betting against the dealer directly and it doesn’t matter too much what the other players at the table are doing – what matters is what hand you’re using. Poker on the other hand put you directly in opposition to all the other players at the table – and if someone has a better skill set than you along with better cards, then the odds are pretty stacked against you.

Blackjack is a pretty standard game wherever you go – and it’s unlikely to vary much beyond having to reach as close to 21 as you can without going bust and having a higher hand than the dealer. With poker, there are a large variety of spin-offs on the traditional game, with each alternate game having slightly different rules to follow. You have varieties such as Texas Hold’em, Three, Five or Seven Card Stud, Let It Ride, Draw Poker, Chinese Poker, Omaha Hold’em, to name but a few variations.

In regard to land-based games, blackjack is a game where the casino (also called the house) will closely monitor their repeat customers – since they don’t like it when people win continuously against them and will often try and deter the winners from returning too frequently. This leads to skilled blackjack players having to move around quite often to avoid being blacklisted, which makes it harder for them to hone their skill set at a place close to home.

Going online however, negates this. With poker players playing at physical casinos, there are numerous tables available, so your odds of playing against the same people every week is slim to none, and the house is unlikely to care too much if a poker player keeps winning big, since players go up against each other, and not the house. 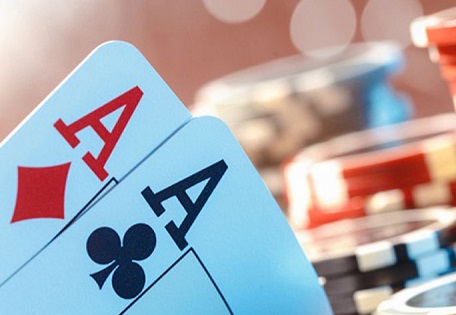 Blackjack is a popular game for card counters, as there are a variety of systems which allow sharp players to track what cards have been played and allow them to then calculate their odds of winning at each step – such as with Red Seven, Zen, Hi-Opt or Halves to name a few.

In poker however, the only way to calculate if you’re winning is to check the amount of chips you’ve won so far, and how many you have left to play with. Or to put it another way, it’s far harder to apply a card tracking system in a poker game against numerous players, many of whom may fold without ever revealing their cards.

Fitzgeralds Casino and Hotel was the name and brand of not only a hotel in Las Vegas, Nevada, but also an entire company called Fitzgeralds Gaming that had a few other hotels across America.

Fitzgeralds Gaming Group was based in Reno, Nevada, and had a total of four casino hotels under its portfolio. The casinos were located in Las Vegas, Colorado, Reno and Tunica Mississippi. All the properties have since been sold and renamed due to Fitzgerald Gaming going bankrupt in 2000. The most well known Fitzgeralds Casino and Hotel was in Las Vegas, Nevada, and still operates as a hotel and casino although under a different name.

The Fitzgeralds Casino and Hotel was originally opened as the Sundance Hotel in 1980. The hotel was owned and operated by a known organized crime figure, Moe Dalitz who was tied to the Chicago Outfit. This obviously caused some difficulty in getting a gaming licence, so the Hotel and casino was nominally run by his associates who also ran the Fremont and the Stardust casinos in Las Vegas. In 1983 these two men however faced suspension of their gaming licence as well, due to skimming. Dalitz then applied to manage the resort himself, but was thwarted by the Gaming Commission who stalled on his license yet again. 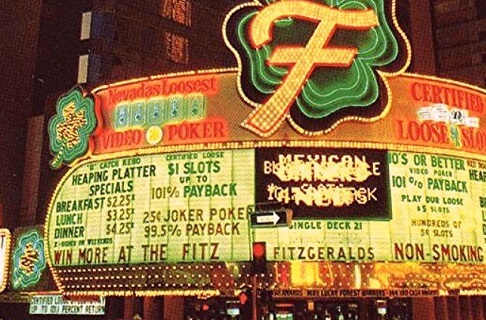 The Fitzgeralds Casino and Hotel Today

Today the Fitzgeralds Casino and Hotel has been renamed the D Hotel and casino, D standing for Downtown. $22 million dollars was dropped on it by its new owners for renovations and modernising. The casino now offers dancing dealers on table games, and one of the only operational Sigma Derby slot machines in Las Vegas. This slot is located in the second floor of the casino, which has a Vintage Vegas theme.

The hotel itself was upgraded as well, with all of the rooms now offering modern amenities and luxurious finishes. Suites were added too as there had only been simple rooms previously. New restaurants were added, as were new bars and entertainment venues. The D has a permanent street front bar in Fremont Street that has flair bartenders as well as dancing bartenders. Another of its bars, LONGBAR is the longest bar in all of Nevada. In 2013 the D began hosting martial arts competitions as well. 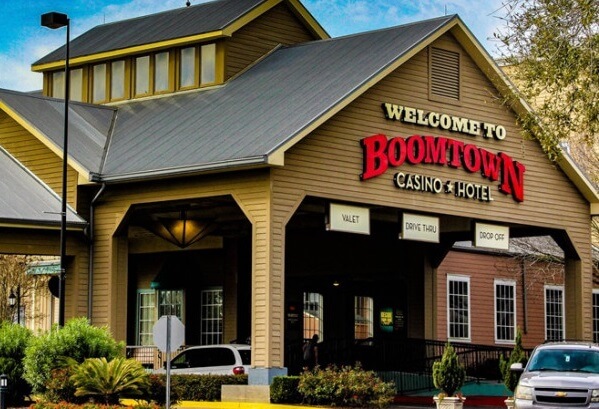 Real money casinos have traditionally been accessed by the casino playing world through the use of downloadable casino software. This software setup is utilised by a significant number of casino operators, who manage their branded casino sites by offering the ability to play real money casino games online.

Real money online casino games have developed a large following all around the world, but specifically in the Philippines as well. The online casino market facilitates the ongoing development of new games and fresh releases, something they feel is key to retaining their market position. The industry machine that facilitates play for real money at casino games online also delivers a remarkable range of awards and licenses, and have, over the past decade or so, established an improving reputation and have been able to ensure a casino experience from the top drawer.

In order to justifiably encourage people to play real money casino games online it has been important for the real money online casinos to develop a reputation based on security and fairness. The top casino sites dealing with real money produce random numbers generators that are used in the various games and slot machines, and are audited annually by independent organizations. In many cases these results are now made public, and this contributes even further to the companies’ reputation and overall aura.

The options around playing for real money at casino online now comprise a substantial range of different games like blackjack here, and this menu simply keeps expanding. Many top online casinos are powered by reputable and tested software, and this fact alone gives Philippine players the assurance they need of top quality and trustworthiness when considering membership at a casino.

The casinos available to Philippine players where they can play real money games at generally encourage new members with an attractive range of welcome bonuses and no-deposit options. The rich game variety is another well known drawcard. Most real money casinos are also designed to cater to the needs of players from all over the world, and are constantly expanding the languages and currencies that they cater to.

The online casino world is constantly evolving, but with the demands of players to be able to play real money casino games online an ever-growing market force, Philippine players can rest assured that the online casino sites available to them will only be improving in the foreseeable future, and that the industry as a whole, will be cultivating a better and better reputation all the time.

Real money casinos where play for real money is provided are also often associated with great non-deposit or deposit bonuses. This has made the overall cognitive effect of playing real money casino games online synonymous with winning and receiving bonus offers. In addition, casinos will be developing all games according to the very highest graphics and gaming experience standards.

Playing for real money is nowadays a mix of downloadable and instant play games. Despite starting out with predominantly downloadable games, instant play has become the trend in real money casino play with the burgeoning mobile market, and most of the leaders in the software development field have embraced this format with their own HTML5 development.