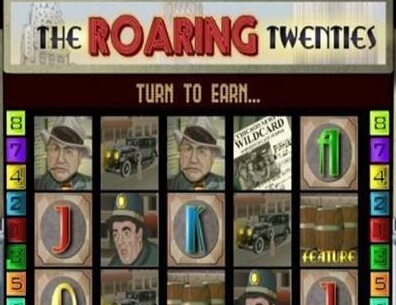 The Roaring Twenties was a contradictory era in the 20th Century. While art deco brought magnificent new styles to architecture and design, and bright young things in the cities of Europe and the USA flocked to post-war dance halls to revel in scandalous jazz and ragtime, the deeply conservative Prohibition movement tried to ban alcohol in the US. It only succeeded in making bootleggers immensely wealthy and powerful.

The Roaring Twenties is a video slot game, available online, that draws its inspiration from this turbulent decade, throwing mobsters, their illicit booze, the policeman chasing them, and party lovers enjoying a Charleston into the mix. Roaring Twenties is played on five reels with three rows, framed by a Twenties-style cinema marquee flanked by gorgeous art deco light fittings. It features 9 paylines, and players can bet from 25 to 1,000 coins per line.

Art deco is not a style used in the design of many slot games and other platforms, and the Roaring Twenties does its best to make up for this deficit by using it in as many places as possible. Even the tiles containing the payline numbers have a Twenties look to them. The style carries through into the poker symbols used for low-value combinations: the red J, yellow Q, blue K and green A are slim, enamelled and elegant. Five As on one payline will win 25X the line bet.

Another unusual aspect of Roaring Twenties is the fact that combos can be made left-to-right from Reel 1, or right-to-left from Reel 5, effectively doubling the player’s chance to win prizes. Compared to many slots at https://bestonlinepokies.biz/iphone-slots-australia, here, game play is generally silent apart from the clicking of the reels, but winning paylines will trigger a quick burst of jazzy music and a brief, simple animation.

The fact that Roaring Twenties has only eight ordinary symbols, along with their ability to form combos in both directions, gives the player better odds of forming combos more often, which explains why the top prizes aren’t as impressive as those won on slots offering more symbols and left-to-right wins only. The four remaining icons are a gangster’s car, a fashionable couple dancing, a uniformed policeman and a tough mobster in a fedora. For the top combo of five of a kind, these symbols pay 50X, 100X, 500X and 1,000X the line bet, respectively.

The Roaring Twenties Wild is a newspaper with the blaring headlines typical of Twenties reports on a police raid. It not only substitutes for the ordinary symbols, it can also stand in for the Bonus symbol when triggering the It’s A Raid Bonus.

Smash Barrels in the Bonus Game

In another departure from standard slots practice, the Roaring Twenties Bonus icon, a barrel of contraband liquor, isn’t a Scatter. Players must get at least three in succession on an active payline, from either Reel 1 or Reel 5, to trigger the It’s A Raid Bonus, although Wilds can be included.

Depending on how many barrels are involved in activating the bonus, players get a certain number of lives in this round, which plays on a second screen. In a cellar filled with booze barrels, the player must pick casks for the policeman to smash. Each successful pick increases the multiplier: it can get to as high as 1,250X the line bet. When the player picks a booby-trapped barrel, it explodes, ending that life, paying the player the accumulated win and returning the multiplier to 0. The round continues until the player has lost all their lives.